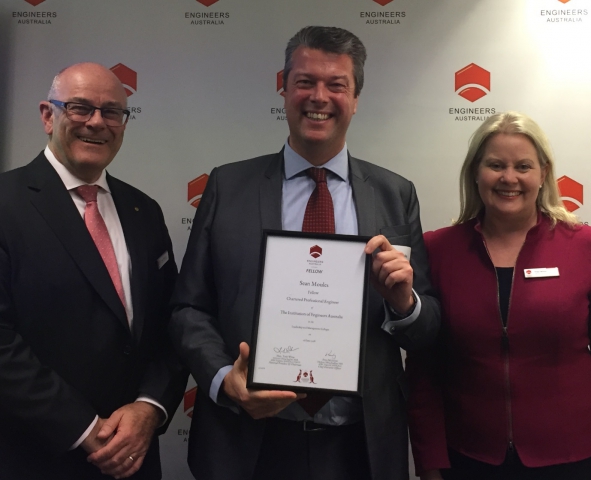 Sean Moules (pictured centre), who is also a Chartered Engineer, was presented with his Fellowship Award by Peter McIntyre, CEO of Engineers Australia (left) and The Honourable Trish White, National President and Board Chair (right) at the annual Engineers Australia South Australian Leadership Forum.

Engineers Australia is the largest professional organisation for Engineers in Australia, with over 100,000 members drawn from across all engineering disciplines and at various levels and stages in their careers.

It runs a series of informative events through the year in Adelaide and other regions, and has many groups formed around key topics. It also helps inform Government on key policy areas requiring engineering knowledge and input, such as Defence, Energy and Infrastructure, and aims to be the trusted voice of the engineering profession.

Sean will also be presenting at the Australian Systems Engineering Workshop (ASEW) about Government Gateway Reviews and their role in Major Capital Project and Program Delivery.

Sean will be presenting an AGM presentation on Nuclear Power, Past, Present and Future, on the 12th November.